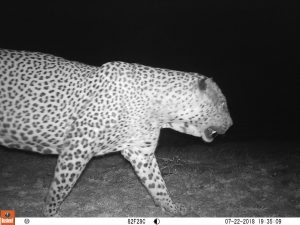 As a MSc student in the UBC Wildlife Coexistence Lab, I’ve always been drawn to interdisciplinary research aiming to address pressing issues of our time. How do we balance poverty alleviation and economic development, while allowing for coexistence with species competing with humans for habitat and potential prey? That’s probably how I ended up studying human-wildlife conflict, a global phenomenon and leading cause of large carnivore decline.  Locally in British Columbia, human-carnivore conflict occurs with black bears, cougars and wolves –  but my research is 13,000 km away in Sri Lanka, where conflict regularly occurs between cattle herders and the endangered Sri Lankan leopard (the terrestrial apex predator).  This conflict will likely escalate unless stakeholders, researchers and community members work together to find practical, long-term solutions that are appropriate for the local context. 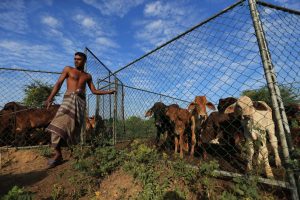 To understand the complexities of interactions between large carnivores and livestock farming communities, I believe we must address both the social and ecological aspects of the issue. One part of my work aims to identify predictor variables and their relative influence on ‘conflict’ (level of livestock depredation by leopards) – specifically: native prey abundance, cattle density, husbandry techniques and distance to forest cover. Using tools such as remote camera traps, GIS and structured surveys, we can analyse these variables and identify potential conflict ‘hotspots’, thus informing the prioritization of limited resources available for conservation. Another part of my work aims to address the social aspect, using surveys to measure attitudes towards a) leopards, and b) willingness to adopt different mitigating husbandry practices, and relate these attitudes to predictor variables such as socio-demographics, cattle demographics, limitations, costs, knowledge and experience. What we may hypothesize as being an intuitive relationship (e.g. those that bear more direct costs from losing livestock will have negative attitudes towards leopards) may not be true in this local context, illustrating the need to include social perspectives in more human-wildlife conflict research. 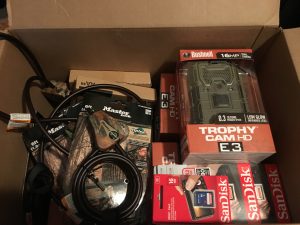 My modest Amazon order of cameras, locks, SD cards and batteries to start me off!

So the plans were all made to pursue this research, and I set out in April to begin fieldwork (I even wrote a blog post about what to expect for a successful field season!). However, as the months went on, I encountered various, unanticipated obstacles. Apart from the obvious concerns of heat, mosquitos, and language barriers, I also ran into problems regarding technology, interpersonal communication, safety, sexism and commitment. One of the most important things I learned was the importance of getting any sort of agreement in writing, even if it’s just for a casual exchange of equipment or supplies.  I learned the hard way that if it’s not in writing, it’s likely not going to be available! For example, a field station was supposed to be ready for my use in April, but as of August, it was yet to be completed. What this meant was instead of meeting my budget of $0 for accommodation, my total expenditure came to over $2000 – a big difference! To make things smoother the next time, transparency is key. Not just regarding funds, but also transportation, field accommodation, data sharing and exchange, guidelines for communication and expected roles. Collaborative projects, especially between universities/NGO’s and developed/developing countries are crucial, but complex. Now I know the importance of ironing out those kinks before setting off into the field, and will keep that in mind in all my future endeavors!

My situation was extremely stressful at first, arriving into Sri Lanka with some camera traps and equipment bought with crowdfunded money (as well as my own). I am lucky that things worked out, and now I have been awarded a Rufford Small Grant, National Geographic Early Career Grant, and a Conservation Grant from the Greeneville Zoo to help fund this research (especially considering the unexpected accommodation and transport costs I incurred). However, all these grants came in after I had arrived, and I was unable to purchase additional cameras from Sri Lanka. A few cameras got stolen, some of them only days after I installed them – and this is simply an inherent issue when working in certain areas. Yala in particular is within a highly superstitious region of Sri Lanka, where many people will instinctively destroy a camera if it is seen. 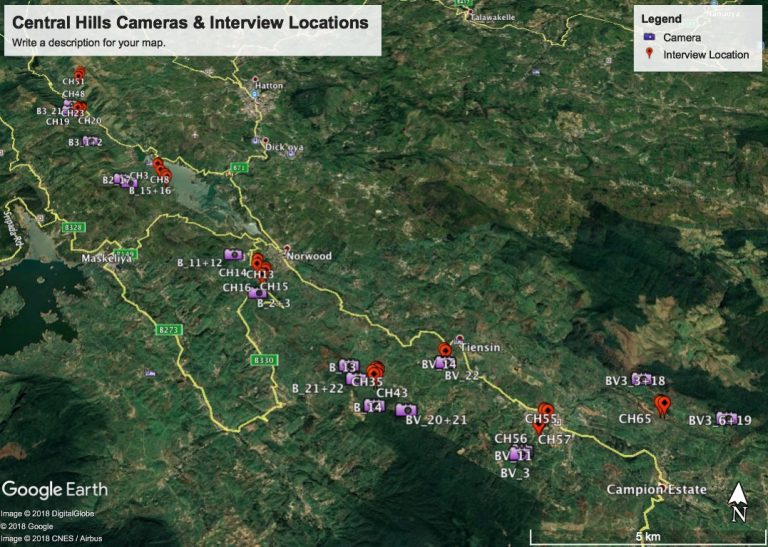 The interview and camera location for the Yala study site. Not ideal due to either theft or high risk of theft, but not bad! 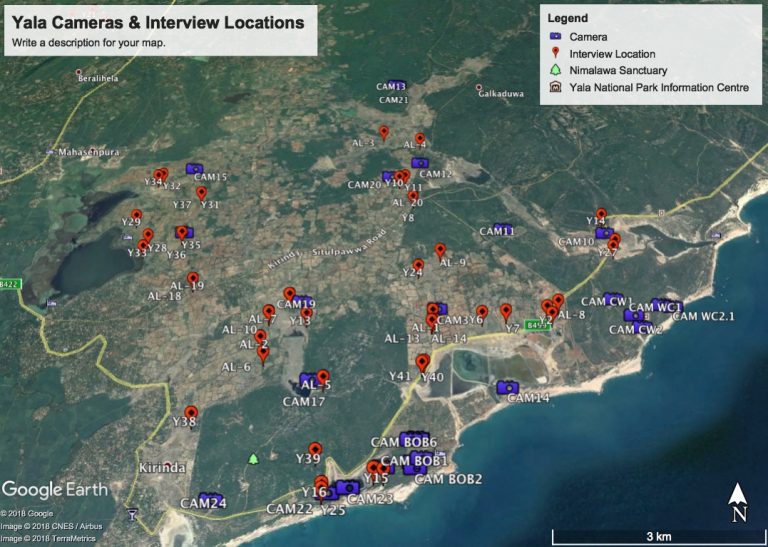 The interview and camera locations for the Central Hills study site, which encompasses eight tea estates that have cattle herders operating within them.

As students, we are pressured with time limits – I have funding secured for 2 years, but after that it’s uncertain. My mindset in the early months of 2018 was to get there, collect my data and keep churning out grant applications until something came through. I have to say, it ended up working out, but I’m not sure if the combination of stress, uncertainty and spending my own savings on field costs without knowing whether I would get reimbursed is something I could do again. In hindsight, I should have waited until I had received some funding, so then I could have adequately prepared myself, and it’s unlikely that I will go into a project without secured funding in the future.

Being Sri Lankan and having visited Sri Lanka many times in the past, I assumed that I would be able to fit in fairly easily. While I did love living as a local, taking the bus and eating street food, it was very clear that I was seen as an outsider. Despite me leading the project, going out into the field on my own and organizing excursions, I constantly found people being very uneasy around me, and preferred talking to my (male) research assistant. When I would call or message someone, I didn’t get a response. When my research assistant did, the response was immediate. I got asked numerous times “isn’t this too difficult for you?” and people assumed I needed to sit down and not want to join when walking to the camera station sites. This definitely got to me, and I felt like I wasn’t being taken seriously at times. It’s a hard feeling to navigate – I wanted to be friendly and do good work, but not create any bad blood. But I also want people to know that conservation work, though difficult, has just as much place for women as it does for men. 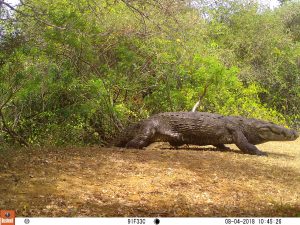 A huge mugger crocodile (Crocodylus palustris), who loved to terrify me by jumping across the bund and into the water every time I went to check the camera.

I had an incredible time this summer (despite the daily heat stroke I got while working in 40°C conditions), and got to see firsthand how communities and wildlife exist in these buffer zone habitats – sometimes peacefully, sometimes not so much. I got some incredible camera trap photos of leopard prey, but also some incidental ones that are too good to dismiss! 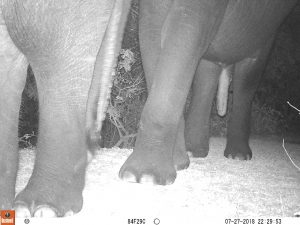 My hope is that the results of this project can be used to make recommendations to local cattle herders and dairy cooperatives, and guide conservation practitioners and policy-makers on practices needed to ensure stable leopard populations. When I return to Sri Lanka, I will present my findings to such audiences and suggest some preliminary actions. However, this project is relevant beyond the confines of Sri Lanka’s small land area.

Regardless of where human-carnivore conflict is taking place, be it on Vancouver Island or the Ruaha landscape in Tanzania, results and lessons learned from each context can help guide future research and action on coexisting with carnivores in increasingly shared landscapes.

I believe this is crucial, long-term research that must be conducted across landscapes globally. For coexistence to occur, we cannot prioritise humans over animals or vice versa, but must study practical ways to accommodate the needs of both. Some advice I can give after my time in Sri Lanka: appreciate that no two sites are the same and lean on local experts for help navigating these complex nuances and attitudes. It takes years, even decades, to fully understand a system and its biological communities, but large carnivores simply do not have decades to spare!

Please get in touch or follow my work through the following platforms: 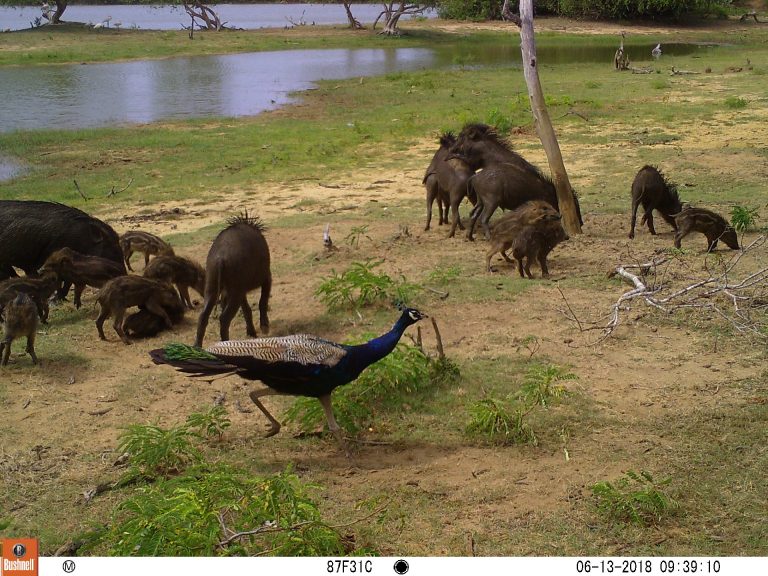 Wild boar (Sus scrofa cristatus) adults and piglets, fresh from a mudbath. Also, a peacock (Pavo cristatus), the only bird species that has been found in leopard scat so far.