***We are looking for camera-trap carnivore records from the dry and moist forests of Western Ecuador and Peru! Please see below and contact us for more information! ***

Map of fragmented landscapes showing distance from the forest edge and, indirectly, patch size. Large patches are shown in blue and small patches in red and orange. (Haddad et al. 2015)

Currently, more than a third of the global forest cover has been lost because of deforestation and land cover change 1, leaving only about 7.5% of global protected areas connected 2. This pervasive habitat loss has contributed to the isolation of protected areas and forest patches which exacerbates the extinction risk of endangered populations 3,4. 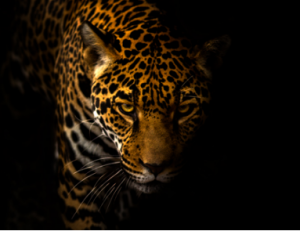 The groups most affected by patch isolation are apex predators and other large vertebrates 3,5,6. Species within the order Carnivora increase their extinction risk after habitat loss and patch isolation because of their large spatial needs and low population densities 6. Additionally, cascading effects after carnivore extinctions and range contractions have several negative effects on community structure and food-web dynamics, such as herbivore hyper-abundance and meso-predator release 7,8. Thus, it is imperative to identify the factors that affect carnivore persistence in isolated populations and protected areas 6,9,10. 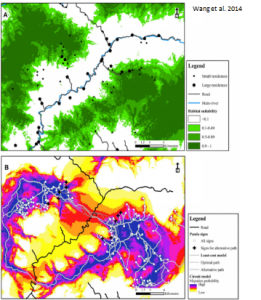 The two largest areas of deforestation, high human pressure, and biodiversity loss in South America are located in the Atlantic Forest in eastern Brazil and northern Argentina, and in the Pacific Forests of northern South America. Because the latter holds critically endangered ecosystems, such as the Tumbesian dry forests, it had been proposed as the Tumbes-Choco-Magdalena hotspot (TCMH) for conservation priority.  Thus, we will work in the southern forests of Ecuador and Peru, within the TCMH. Currently, our main objectives are to: 1) identify the factors affecting carnivore persistence in fragmented landscapes and 2) identify species-specific responses to fragmented landscapes.

Thanks to NGO’s Spectacled Bear Conservation Society and BioS for sharing their data and collaborating with us! We are also joining efforts with the University of Guayaquil and in the next few weeks we will start to set cameras in Isla Santay near Guayaquil City in Ecuador!! We are currently gathering existing field data sets to include in our analysis. So if you have carnivore records and would like to collaborate, please contact us at cindymel[at]mail.ubc.ca and cole.burton[at]ubc.ca!