April was a good month at WildCo!

The spring semester finished off well for the WildCo Lab. Erin Tattersall and Joanna Klees van Bommel were both awarded prestigious NSERC CGSM awards. Aisha Uduman also received an award from the Rufford Foundation as she embarks on field work in Sri Lanka for her M.Sc. research on leopard-livestock coexistence. Congratulations to all!

And a big congratulations to Dacyn Hollinda, who successfully defended his Honours thesis on the “Impact of lure and habitat characteristics on camera trap detectability of mammalian predator and prey species”. Alexia Constantinou also finished up her senior thesis on salvage logging and moose in northern BC, and Patrick Gibeau completed his Directed Studies on wildlife fence crossing as part of the bison reintroduction program in Banff National Park.

Joanna, Erin and Cole had a successful field trip to the frozen bogs of northern Alberta, collecting a new crop of exciting camera trap photos (like this fox carrying his tasty snowshoe hare snack). 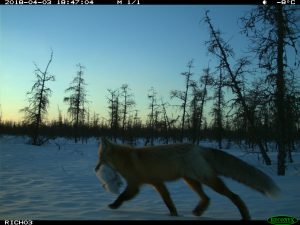 Cole also enjoyed his first participation in the Forestry Spring Camp at Malcolm Knapp Research Forest, joining Verena Griess in leading students through some transects looking for wildlife sign (like these deer and hare pellets Verena is showing off!) 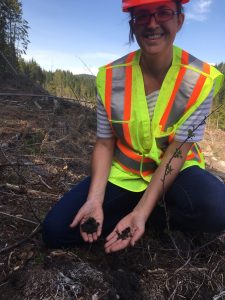 And to end the month, Cole gets to join Cindy and Francis, and others from the Spectacled Bear Conservation Society, for a field visit to the dry forests of northern Peru!