Let’s talk taxonomy. The decision to put species into defined groups is often straightforward and logical (vertebrates vs invertebrates), and occasionally arbitrary (barren-ground vs woodland caribou); but, in some cases, it’s a source of confusion.

I study cougars (Puma concolor), also known as mountain lions, pumas, deer tigers, and many, many other things (I think they’ve won awards for it). Like all cats, cougars are part of the Felidae family. Adult cougars weigh in around 29-100 kg, stand at about 60-90 cm, and are often as long as 2 metres (thanks, long tails!). They’re a big cat, except they’re not? “Big Cat” is actually a colloquial term sometimes used to define an important distinction between cats in the genus Panthera. Panthera’s extant species are:

But, out of those five, only the first four are capable of roaring (based on the morphology of their larynx) – and this roar is what defines a “Big Cat”. Thus, according to this definition, only four of the 37-42 cats in the world are Big Cats (uncertainty due to debates in the genetic community), and the fact that they all happen to be large may or may not be tied to their larynx at all.

Where this really gets confusing is when applying for grants to study a cat. Cat grants come in three main categories: Big Cat grants, small/cute cat grants, and endangered cat grants. These are wonderful, important groups that cover incredible cats like Big lions (Panthera leo), small/cute rusty-spotted cats (Prionailurus rubiginosus), and endangered cheetahs (Acinonyx jubatus). But based on the definition above, these grants don’t cover a large but not “Big”, cute but not small, and declining but not endangered, cougar.

Thankfully (but confusingly), every granting organization seems to define their cats differently, and some include cougars! The Wildlife Conservation Society and Panthera (the organization, not the genus) says there are seven species of Big Cats: 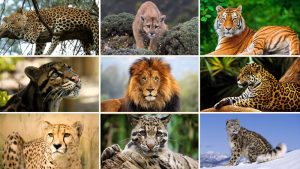 The decisions behind these inclusions are not made clear, it could be based on body size, ecological function, or another special type of vocalization. World Wildlife Day on March 3rd of this year was “Big Cat” themed, and CITES gave the following statement: “In an effort to reach as wide an audience as possible, the expanded definition of big cats is being used, which includes not only lion, tiger, leopard and jaguar — the 4 largest wild cats that can roar – but also cheetah, snow leopard, puma, clouded leopard, etc.”

But what does that “etc.” include? Just Sunda clouded leopards, like National Geographic says? Or does it encompass cats not mentioned above? Clouded leopard adults weigh between 12-23 kg, while the Eurasian lynx (Lynx lynx) is between 18-30 kg. And the caracal (Caracal caracal) is pretty tall at 40-50 cm. Both these species are covered under Panthera’s small cat grants, so they aren’t ignored, but what is the cut off? I guess if you are the one with the money, you can do what you want.

So here I am, confused. If I were to receive a big cat grant, could I write publications on my research calling cougars Big Cats?  Hopefully I get to find out!*

* Shortly after writing this I heard that I received a National Geographic grant – so I guess I WILL be calling my cougars Big Cats!