The Wildlife Coexistence Lab at UBC is researching a number of wildlife species to investigate how human development impacts their distribution and abundance, and how human-wildlife conflict can be alleviated. Find out more about #WildCo 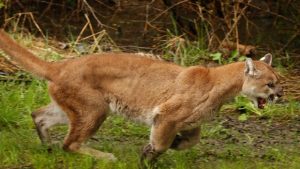 In this May 23, 2012, file photo, an approximately 2-year-old female cougar runs away from a Washington Department of Fish and Wildlife trap after being released northeast of Arlington, Wash. (Mark Mulligan/The Daily Herald via AP, File) CTVNews

Globally, human-wildlife conflict incidents are occurring with increasing frequency and as we continue to alter natural landscapes to suit our own needs, these will undoubtedly escalate further. Largely the core issues remain the same and, in most cases, wildlife ends up being the loser. Finding solutions to reduce or remove incidents of human-wildlife conflict is an ongoing concern and one which needs to be prioritized if we are to avoid further local extinctions or extirpations.

Only recently, three young cougars habituated to human areas were killed in British Columbia following several attacks on local pets. Relocation was not seen as an option since these individuals were not used to hunting in the wild and could likely become increasingly aggressive due to hunger, which in turn could result in more serious human-wildlife conflict. Reportedly this type of conflict is set to rise locally as more areas of natural habitat are converted for real estate development. 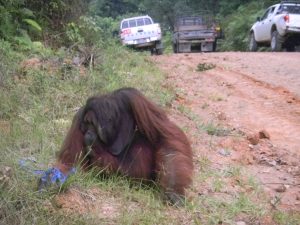 Disorientated and displaced orangutan in search of food, is rescued along a road in East Kalimantan ©Borneo Orangutan Survival Foundation

Many species are negatively impacted by incidents of human-wildlife conflict and moving to the other side of the world to Indonesia, one of our closest living relatives faces a very tenuous future in the wild. Habitat loss has marginalized and fragmented orangutan populations across their range and brought this unique, slow reproducing great ape species into daily contact and conflict with humans.

Before the 1960’s, the majority of orangutans in Indonesia were protected simply by their existence in extremely isolated forested regions. Local Dayak people traditionally hunted orangutans, but 60 years ago hundreds of thousands of orangutans continued to survive on the islands of Borneo and Sumatra. Fast forward a few decades and forest conversion to make way for largescale agricultural plantations such as oil palm, logging, mining and hunting, has resulted in the predicted loss of 82% of Bornean orangutans in three generations, more than 100,000 of which was in the last 16 years. The Sumatran species has fared no better, and combined only around 72,000 orangutans continue to survive in the wild. 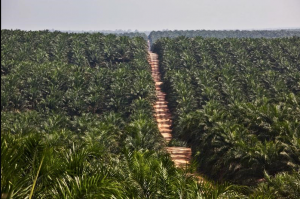 Human-wildlife conflict situations are frequent and if an orangutan is fortunate enough to have survived areas of deforestation, it is often left hungry and in desperate search of food. This brings orangutans into conflict with humans over crop raiding in plantations or in local people’s small farms or gardens. In these situations, most commonly, either the orangutan is shot and killed, or harmed in an attempt to drive it away. Relocations (or translocations) are often undertaken if the orangutan is of a sufficient age and in good health, but that can present challenges to other wild orangutans. Many surviving forest areas harbor a resident orangutan population and introducing a new unrelated individual can result in conflict over range and access to food and females. 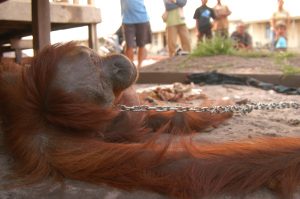 More challenges persist and for displaced orangutans wandering into oil palm plantations, companies have been known to place bounties on orangutan heads for as little as $70-$100 per successful orangutan kill, in spite of their IUCN Critically Endangered status. Some local people 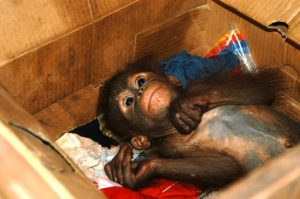 continue to consume orangutan meat and a hunter is particularly fortunate if he encounters a mother-infant pair; the mother serves as a meal and the infant is either kept as a pet or sold on the illegal pet trade. Despite international and national laws protecting orangutans, a demand for young exotic pets continues with infants illegally trafficked overseas to countries like Kuwait and Thailand. It is a lucrative market with an infant fetching a price locally of as little as $75, but international sales can reach up to $35-40,000.

So where is all of this going to end? Saving wildlife is fraught with a plethora challenges. There are complex issues in Indonesia, and too in Canada, which are driven largely by economics. But whether natural habitat is encroached upon for the extension of agriculture, like oil palm expansion in Borneo, or to build new housing in British Columbia, we will continue to negatively impact wildlife and ultimately, if solutions are not found, slow reproducing charismatic species like the orangutan may well be lost….